Copus to Santiago connection leads to 60-14 win over Independence 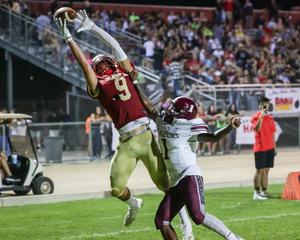 Continually give the Golden Hawks a short field by constantly turning the ball over like Independence did on Friday night and things are going to get ugly. Continually give the Golden Hawks a short field by constantly turning the ball over like Independence did on Friday night and things are going to get ugly.

Centennial converted four Falcons fumbles lost during the first 12 minutes and five seconds of the game into an early 26-0 lead en route to a 60-14 blowout at CHS.

Centennial has outscored its three opponents 127-42.

“I’m really excited about where our team is at, but we got a lot of growth though,” Centennial coach Richard Starrett said. “We need to get better, for sure.”

Copus wasn’t the only player to have a huge night for CHS. Wide receiver Jaxton Santiago caught nine passes for 199 yards and four touchdowns, while also starting on defense.

The Falcons simply had no answer for the big, fast, and explosive 6-foot-3, 215-pound junior, who caught everything throw to him. It didn’t matter how tightly the Falcons tried to shadow Santiago, who either got open anyway or used his tremendous athletic ability to come down with the ball the few times Independence defenders were able to stay close to him.

“I think he’s the best player in Bakersfield,” Starrett said. “I’d put him up against anybody. Just a great kid. Two-way player. 4.0 GPA. Hardest worker on the team. The leader of the team. Any time you have a guy like that on your team good things are going to happen.”

The Copus to Santiago combination connected five times for 98 yards and two touchdowns during the first quarter, alone.

“We came out here with a gameplan,” Santiago said. “We knew what they were going to run, and we just continued to execute throughout the entire game.”

Copus misfired on six of his first nine pass attempts, but then got red hot as the game went on, completing his final 12 throws. He finished 17 of 24 for 277 yards through the air.

“I think I have a great O-line and my receivers make it easy on me. They’re really good,” Copus said. “The leadership on this team, the play calls, just everything worked out today. That’s why we scored 60.”

Both of IHS’ touchdowns were scored by Anthony Rico. Early in the second quarter the diminutive speedster took a short pass from Prince and raced 54 yards for a touchdown that trimmed the CHS lead to 26-7.

Trailing 39-7 at halftime, Independence took the second half kickoff marched 79 yards on 14 plays for a TD. Rico did the honors with a five-yard run.

But one play after Copus was sacked following a 51-yard kickoff return by Noe Estrada, Santiago found paydirt for a fourth time.

Copus hit him in stride with a short slant over the middle and Santiago did the rest, breaking a tackle before turning on the jets and outracing several Indy defenders to the end zone.

“Give credit to big boys up front and my quarterback,” Santiago said. I couldn’t have done it without them.”

Santiago’s final TD of the night erased any faint hope of a possible Falcons comeback.