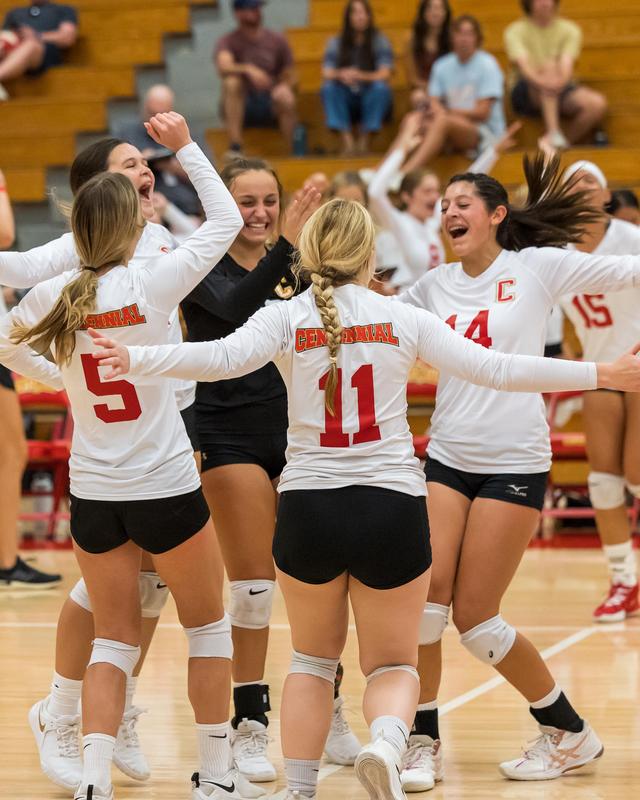 Coming off a disappointing showing 48 hours earlier, the Centennial High volleyball team looked to return to its winning ways on Thursday night before heading off to the Clovis Tournament this weekend.

Centennial turned in a strong all-around effort, outplaying the Drillers in all phases of the game.

“I think it was a great bounce-back from losing on our homecourt on Tuesday against Fresno-Central in four (sets),” Centennial junior outside hitter/opposite Lara Martinez said. “To come back and sweep a team like BHS was good. I’m really proud of the girls and how we did.”

The host Golden Hawks, led by freshman outside hitter Ila Rose, who had a match-high 14 kills, rarely trailed in any of the three sets.

“I think we came in with a better attitude than we did on Tuesday,” Martinez said. “(Central) was our first home match, and we were really nervous. We practiced on Wednesday. Today we came with a great mindset, a great attitude and that really showed on the court today.”

Rose had plenty of help with the offensive attack as the Golden Hawks’ setters spread the ball around to a plethora of teammates for kills.

Martinez added eight kills, many of them coming off passes from Morgan George (15 assists).

The biggest differentiating factor between the two squads was serving and serve-receiving.

Centennial had 16 aces including 10 by Iliana Salazar. BHS struggled with its serving, racking up five service errors.

Many of BHS’ troubles handling serves came during the first set, which saw the Golden Hawks use an 8-1 run to erase an early 2-0 deficit and take command of Game 1.

The run was fueled by back-to-blocks by Addison Carter.

The second set was much tighter. Strong play at the net by Addison Olson kept BHS close until late in the game. Trailing 19-17, a hard kill by Olson made it a one-point game. However Centennial quickly regained control, closing out the set with a 6-0 spurt that featured back-to-back aces by Jozzi McFee.

Its fate pretty much sealed, BHS hung tough early in the third set, but a strong CHS surge eventually overwhelmed the Drillers.

“I definitely think we played as a team and I think the girls were able to utilize this match as a good segway into this weekend,” CHS coach Callie Albison said. “Having that confidence, having that winner’s mentality is definitely going to help us in the Clovis Tournament this weekend. We’re going to be facing a lot of tough teams, so we definitely need that.”

“I think this is the best match that we have ever played,” BHS coach Michael Ornelas said. “I didn’t mind our loss today. I think we played amazing. We competed with them. Gave them all we had. I’m really proud of my girls.