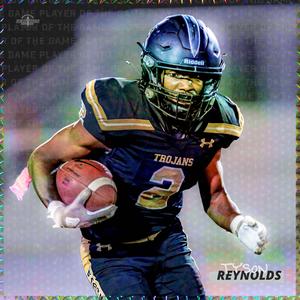 After hanging on to defeat North, 8-6, on Thursday night, the Foothill High football team immediately began focusing on its next game.

By beating the Stars in a hard-fought defensive battle, the Trojans improved to 6-0 on the season for the first time since 1996. After hanging on to defeat North, 8-6, on Thursday night, the Foothill High football team immediately began focusing on its next game.

By beating the Stars in a hard-fought defensive battle, the Trojans improved to 6-0 on the season for the first time since 1996.

But more importantly the win puts the Trojans in position to go after its first league championship since 1981.

One of the main hurdles standing the way of Foothill reaching that goal is a game against longtime nemesis Highland this coming Friday night.

The Scots have beaten the Trojans the last 10 times they’ve played each other.

“Our goal is a league championship, and that goes through Highland High School,” Foothill coach Brandon Deckard said.  “One way or another we’re going to go up there and play for it and see what happens.”

The matchup between Foothill and Highland wouldn’t have nearly the importance that it does, had the Trojans not squeezed past a physical North squad at Ned Permenter Stadium.

A defensive battle from start to finish, Foothill overcame a 6-0 first quarter deficit by marching 80 yards on 19 plays to score their only points of the game with 31 seconds left in the first half.

Foothill quarterback Rafael Monje capped off the nearly 10-minute drive by faking a handoff to standout fullback Kaelan Deloney before weaving his way four yards into the end zone.

The Trojans defense allowed North just 177 yards of offense, including just 63 in the second half.

Despite not being able to move the ball consistently, the Stars had a chance to win the game late after Foothill failed to convert on fourth-and-three from its own 43-yard line with 3:40 left in the game.

After allowing North to gain five and then six yards on its first two plays of the possession, the Trojans defense stepped up and snuffed out the drive.

Following an incomplete pass by North quarterback Carson Bennett, Foothill slammed Mario Gonzales for a three-yard loss. Faced with third-and-thirteen, Bennett once again tried to go to the air but was sacked for seven-yard loss. The Stars hopes ended for good seconds later when Bennett’s’ desperation fourth down pass fell incomplete.

Despite struggling on offense most of the night, the Stars were able to gain the early advantage on a 9-yard touchdown run by Mar Kai Shaw.

Shaw, who started at quarterback and had 80 yards rushing, including a 59-yard breakaway that setup the touchdown, didn’t play at all in the second half after getting nailed with a hard hit on the last play of the first half.

Shaw insisted that he was okay but North coach Richie Bolin didn’t let him return to action as a precautionary measure.

The Stars certainly could have used Shaw’s explosive playmaking ability in the second half. North had just three first downs after intermission.

Deloney ran the ball 23 times for 130 yards, which accounted for more than half of the Trojans game total of 208.

Despite not having the result go his team’s way, North coach Richie Bolin took some positives away from the game.

“This game essentially was how we thought it would be,” Bolin said. “A super physical team. We needed to step up physically and our guys did. I was pretty happy about how physical and hard we played. They just executed more plays than we did. That’s football.”