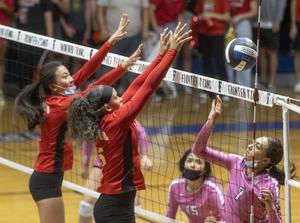 There’s never been a doubt that the Centennial High volleyball team has the talent and motivation to compete for the Southwest Yosemite League title this year.

The only question regarding the Golden Hawks was whether they would play up to their immense potential on a consistent basis. There’s never been a doubt that the Centennial High volleyball team has the talent and motivation to compete for the Southwest Yosemite League title this year.

The only question regarding the Golden Hawks was whether they would play up to their immense potential on a consistent basis.

Halfway through the SWYL season and it’s clear that Centennial is doing just that.

“I think the girls were very motivated to win this (match) tonight,” Centennial coach Holly Russell said. “Every match we have built our confidence more and more. As the season progresses, we just continue to fine tune our team chemistry and it’s going quite well for us.

Centennial is one game behind SWYL leader Liberty. The Patriots beat the Golden Hawks 3-1 when the two teams faced each other earlier in the season.

Against Frontier, visiting Centennial controlled the action most of the match.

The Prescott sister duo overwhelmed the Titans with their timing and athletic ability, continually jumping up high in the air to receive pinpoint accurate passes from senior setter Leah Arellanes (37 assists) before hammering them off the block and out of bounds or directly to the floor.

“They’re phenomenal athletes,” Russell said of the Prescott twins. “They can truly do anything. They can hit. They can pass. They can dig. They could set if we needed them to. They can do all the skills of volleyball. To have them on our team and in our program is an absolute blessing. They bring a lot of fire and energy to the team. They’re fantastic.”

Propelled by their powerful attack and a strong team defensive effort, the Golden Hawks led the first two sets from start to finish.

They trailed only one time, by a point, early in the third set.

“We wanted to demolish them,” Nya Prescott said. “…We really played well together as a unit and as team and that really showed on the court.”

Russell was just looking for a sweep against a quality opponent.

“We’ve been focusing on taking teams in three sets,” Russell said. “Not letting up. Not letting points slip away from us. In the first set there was not one situation where we didn’t side out on the first ball. So, we did not let them get on serving runs that first set and it really worked well for us.’

The biggest challenge of the night for the Centennial came in the third set. Leading 11-6, the Titans went on a 5-0 run to tie things. But after a timeout the Golden Hawks quickly regained the lead and then after things were tied again, 13-13, closed out the set on a 12-3 spurt.

“We just had to get mentally focused,” Nariah Prescott said. “We just had to come together as a unit and just talk about our problems and how to fix them and just execute overall.”

According to Alexander there was a simple explanation for Centennial’s win over Frontier.

“I thought it was a really hard-fought match by us,” Alexander said. “We came out and knew what we wanted to do and just did a really good job executing it.”

“We struggled to come together as a team tonight,” Frontier coach Katie Gardenhire said. “…They do such a phenomenal job with it at practice and we just got to the (match) and it didn’t come together.”

The Golden Hawks (17-6-1 overall) head into the second half of SWYL play having won 17 and tied one of their last 20 matches.

All that winning has given Centennial even more belief that they can take down Liberty when the two schools square off again next Tuesday (Oct. 12).

“I definitely think that our girls are a lot more confident,” Russell said.  “And even since we’ve played Liberty we’re a different team. Every day we’re getting better. Every day the girls are improving. And that drive to win gets stronger and stronger as we progress. I think we’ll be in a good spot when we face them again.”