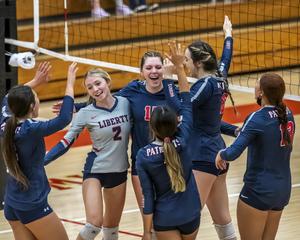 It’s no secret that the Liberty High volleyball team has gotten the better of longtime adversary Centennial in recent years.

The players on the two teams know each other well from playing club volleyball together and have a keen sense of awareness regarding the history of the crosstown rivalry. Photos by Nick Ellis- Click Here for the Full Gallery

It’s no secret that the Liberty High volleyball team has gotten the better of longtime adversary Centennial in recent years.

The players on the two teams know each other well from playing club volleyball together and have a keen sense of awareness regarding the history of the crosstown rivalry.

For Patriots, the objective of their Southwest Yosemite League match against the Golden Hawks on Thursday night was to keep the status quo, which they did by claiming a 25-21,19-25, 25-17, 25-18 victory.

Junior outside hitter Grace Witcher had a match-high 16 kills for the Patriots, who extended their winning streak against Centennial to eight matches. Liberty is now 13-1 versus the Golden Hawks since 2015.

“I was proud of the way that they battled,” Liberty first year coach Morgan Dake said. “That’s a really tough team with two outside hitters that are pretty dominant. We really couldn’t slow them down, so we just had to take care of our side of the net from a service standpoint. I thought when we took them out of system it was a lot more manageable match for us.”

A stellar defensive effort and the deft passing of senior setter Jade Felicidario, combined with Witcher’s powerful and accurate hitting propelled the Patriots (13-4, 2-0 SWYL) to wins in sets No. 1, 3, and 4.

Witcher had 15 of her 16 kills in those three sets.

Liberty never trailed in the first or third set and fell behind in the fourth set just one time, briefly.

The first set featured seven ties and was highly competitive until the Patriots, leading 22-21, finally pulled away for good with consecutive kills by Witcher, Halle Rodriguez, and Maysen Pascoe.

Not deterred by the close setback, Centennial dominated the second set by temporarily neutralizing Witcher while serving six aces, including three by Analisa Alexander.

Leading 8-5, the senior defensive specialist served two aces in a row, which was immediately followed by two straight kills by Nariah Prescott. Alexander then capped off a 5-0 Centennial run with another ace, extending the Golden Hawks lead to 13-5.

That proved to be an insurmountable deficit for Liberty to overcome.

The Patriots regrouped between the second and third set and went back to playing much like they had in the first set, good, solid, all-around volleyball.

“This (match) was really big for us because Centennial has been doing really and they’re a really great team,” Felicidario said. “It was our time to come together, and we finally showed that. I’m super proud of everyone on my team.”

According to Felicidario they were a couple of keys to the victory for Liberty.

“It was 100-percent (due to) energy and talking to each other,” Felicidario said. “That’s kind of what we’ve been missing in our preseason (matches). But we brought so much tonight. We cheered each other on and encouraged each other and it helped us out so much.”

With the win Liberty improved to 49-3 in SWYL matches since 2015. The Patriots have won at least a share of the league title each of the last five seasons, excluding 2020 when there wasn’t a league season.

They hope to make it six in row, though that’s just one their goals this season.

“Obviously our goal is to win league, but we’ve kind of talked about as a group, November is more important than September,” Dake said. “So, we just have to keep getting better because we know what’s ahead. We know that there’s really good schools. Centennial is a great school. Out league is pretty good anyways. And then we have to fight with all those Clovis schools that are continuing to get better. By the end of it you just hope every single day, every match that you’re improving, and you can fight in those tough, pressure situations and apply that to post-season.”

Centennial entered the night having won 10 of its 11 previous matches this season.

Golden Hawks coach Holly Russell believes her team has the talent to beat Liberty. They just didn’t play their A-game on Thursday.

“I definitely think that the girls didn’t play to their potential,” Russell said. “I do believe that we still have a lot more skilled players than Liberty does. I just don’t think that tonight we came out to play like we normally do.”

Russell felt that her squad came up particularly short in one aspect of play.

“Our defense, we did not go for very many balls,” Russell said. “We were not very aggressive on defense and I think that’s what really cost us the (match) tonight.”

Russell obviously wasn’t happy with the result but thinks that it won’t have any long-term effect on her team.

“I really do not think it’s going to set us back,” Russell said. “I think that continuing in league, Liberty is going to be our toughest opponent…Our seniors…they want a win (against Liberty) so badly that they are going to turn it around for our next faceoff with (them).”