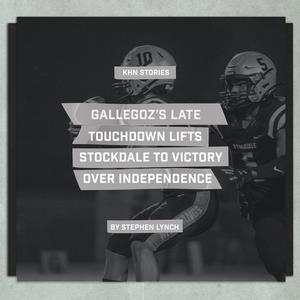 Despite struggling to score points most of the game, Stockdale High quarterback Jordan Gallegoz had confidence that the Mustangs offense would come through when it mattered most.

Despite struggling to score points most of the game, Stockdale High quarterback Jordan Gallegoz had confidence that the Mustangs offense would come through when it mattered most.

Gallegoz’s TD scamper came with 1:44 remaining in the game and lifted the Mustangs to a 15-12 non-league victory over the Falcons on Friday night.

Stockdale, playing its first game in three weeks due to a bye and a COVID cancellation, improved to 8-1 all-time against Independence despite being flagged 14 times for 118 yards.

“I told the guys, ‘Let’s go down there and score,’” Gallegoaz said. “We got a lot of penalties and that could have caused us to put our heads down, but we kept our heads up. All the grind we put in together, it’s just like we could trust each other out there. They trusted me out there and I trusted them out there and all went good.”

But after Brandon Arzabal plowed his way into the end zone from two yards out to cap off the Mustangs’ first possession, they went into an offensive funk.

Stockdale had nearly as many penalty yards (103) as offensive yards (129) in the first half.

Regardless, the Mustangs led 7-6 at halftime.

Once second half started it didn’t long for the lead to change hands as Independence received the second half kickoff and went on a 65-yard drive that was capped off by Anthony Rico’s 7-yard touchdown run.

The Falcons finished with 190 yards of rushing. Quarterback Ladon Denmark had 12 carries for 111 yards including a spectacular 57-yard dash that setup Independence’s only points of the first half, a 1-yard touchdown run by Evan Peaker with 5:27 left in the second quarter.

The Falcons lack of reliable kicker caused them to attempt two-point conversions after both of their scores.

They failed on both attempts, leaving the door open for Stockdale to regain the lead with a touchdown.

The odds of that happening didn’t look promising for the Mustangs when Gallegoz huddled up the offense one last time with the game hanging in the balance.

Prior to its game-winning drive, Stockdale’s previous four possessions ended with three punts and a turnover on downs.

Gallegoz accounted for all the Mustangs passing yardage.

Much of it came on a 55-yard strike to Adrien Medina that setup Stockdale’s first touchdown.

The Mustangs propensity for getting called for penalties derailed several other scoring opportunities.

Late in the second quarter Arzabal, who led Stockdale in rushing with 70 yards on 13 carries, had an 82-yard kickoff return for a touchdown wiped out by a blocking in the back penalty.

However, ultimately a strong defensive performance (three sacks and five other tackles for a loss) combined with the final clutch drive was enough for the Mustangs, who missed two weeks of practice because of COVID-19, to claim the hard-fought win.

“We definitely shot ourselves in the foot early,” Stockdale coach Brett Shelton said. “A lot of mistakes we have to clean up. But having those two weeks off, it was not easy…I’m extremely proud of these guys for believing in each other. We talk about being in that cold dark corner on Friday nights and leaning on each other because that’s all we got…These guys have stuck together through all the adversity. Through all this time off. They’ve continued to fight for each other and support each other and you saw that in the second half.”

The setback was obviously disappointing for Independence, which fell to 0-4 on the season.

Three of the Falcons losses have been by 10 points or less.

“It’s a dejecting feeling but we’re staying positive for the boys,” Independence coach Tyler Schilhabel said. “They have to understand that we’re still a good team. That we’re still a force to be reckoned with. We still have the opportunity to do something for the first time in school history, which is win a league championship out-right. That’s our goal now.”