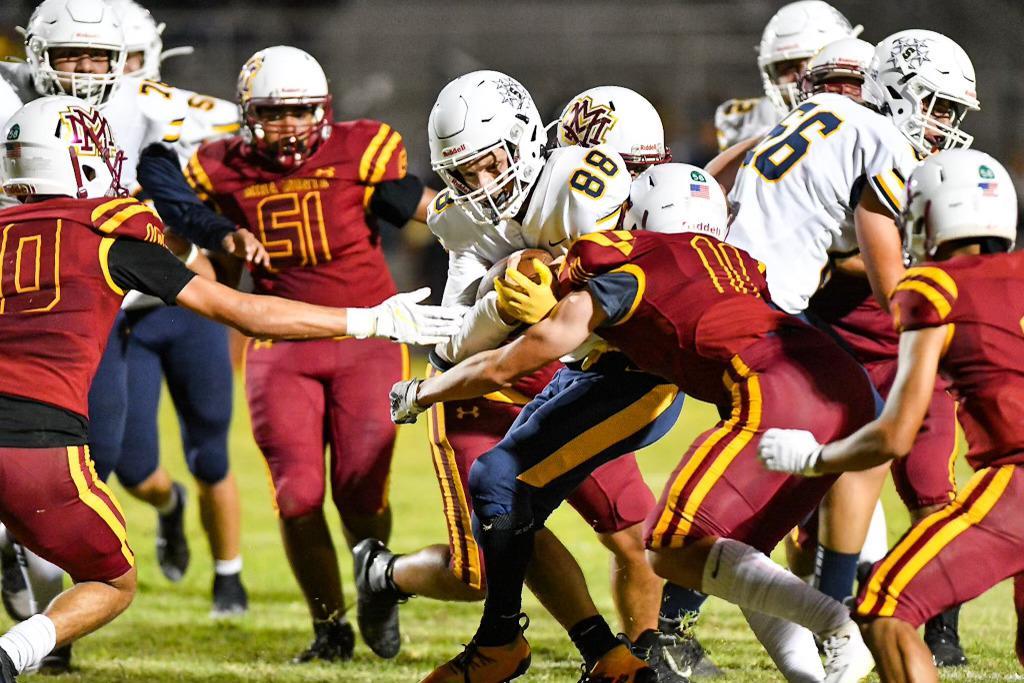 But without injured star quarterback Tyson Dozhier, the Generals’ field general was forced to go with a more straightforward approach against Mira Monte on Friday night.

The change worked to perfection. The visiting Generals rushed for 317 rushing yards in grinding out a dominating 40-7 victory over the Lions.

Devon Sundgren, Shafter’s top wide receiver, stepped into Dozhier’s quarterback role and delivered an admirable performance, rushing 13 times for 110 yards and two touchdowns while connecting on 9 of 14 pass attempts for 90 yards and one touchdown.

“It all started up front for us,” Pierucci said. “We were able to run the ball at will. Our offensive line is the one group on our team that is senior laden…We threw the ball when we had to, because that’s still something we need to clean up quite a bit…Defensively we flew around. Still have a lot of mistakes to fix but very happy with the steps we took forward.”

Mira Monte, playing its first game of the season, kept things even until the Generals scored on their final two possessions of the first half and went into the intermission with a 19-7 lead.

Things continued to go Shafter’s way in the second half.

After a three-and-out to start the third quarter, the Generals offense scored touchdowns the next three times it had the ball, securing Shafter its first win of the season.

The lopsided final score was partially the result of Mira Monte’s offense failing to finish off drives deep into Shafter territory.

Twice the Lions moved the ball inside the Generals 20-yardline only to come away empty after failed field goal attempts.

Early in the second quarter Mira Monte appeared to have taken a 10-7 lead when Nathan Perez’s 39-yard field goal attempt split the uprights.

However, the Lions were flagged for unnecessary roughness on the play and the score was nullified.

It was one 15 penalties called on Mira Monte.

Early the third quarter Perez had a 39-yard field goal attempt blocked after Abraham Casillas broke off a 46-yard run and the Lions moved the ball down to Shafter 13-yardline.

“We definitely shot ourselves in the foot a few times and we weren’t as disciplined as I hoped we would be,” Mira Monte coach Christian Johnson said. “…We’re just going to keep working. I promise we’re going to get better.”

Shafter, which out-gained Mira Monte 407-182, made the most of its scoring opportunities.

The Generals took advantage of a pair of Lions miscues to score touchdowns.

That touchdown extended Shafter’s advantage to 33-7.

The Lions ensuing possession ended with them fumbling the ball and Shafter recovering.

Four minutes later, Saldana powered his way into the end zone for an 8-yard touchdown.

Saldana, who didn’t carry the ball in the first half, finished with nine rushing attempts for 60 yards and the two touchdowns.

Shafter’s leading rusher was Koa Rhodes. The 6-foot, 160-pound junior had six carries for 113 yards including an electric 86-yard touchdown scamper that extended Shafter’s lead to 19-7 with 2:08 left in the first half.

Most of Sundgren’s passing yardage occurred during the third play of the game when he fired a quick slant that Jesus Figueroa snared before bolting into the end zone for a 46-yard touchdown.

Mira Monte quickly responded to that score by driving 50 yards to draw even, 7-7, on a 4-yard TD run by Casillas.

The Lions rushed for 97 net yards. That total would have been higher except for a spectacular night on defense by Shafter’s Elijha Lucero. The senior outside linebacker had two sacks for negative 17 yards and a tackle for a loss of six yards.

“It’s been a rough one,” Lucero said. “We lost both of our first two games by seven points. So tonight, we decided work on ourselves. Focus on the little things, be disciplined, and play football. You can see the results.”

The Generals defense had three sacks in total.

“Tonight Coach (Sean) Lozano, my defensive coordinator, did such a good job of preparing them and for the first time we really saw that dog in our kids,” Pierucci said.

Mira Monte’s defense tackled Sundgren behind the line of scrimmage only one time.

The Lions kept the 5-foot-11, 170-pound speedster from making any long runs, but he did manage to do damage with his legs.

Twice he capped off Shafter drives with short scoring runs. His 1-yard TD run with 4:51 remaining in the first half gave the Generals a 14-7 lead. That score capped off a 17-play, 94-yard drive that took almost seven minutes off the clock.

Late in the third quarter Sundgren finished off a 11-play, 78-yard Shafter drive with an 8-yard touchdown run.

“Shafter came out and made plays and we didn’t capitalize on the opportunities that we had,” Johnson said. “It’s stinks that this was our first game, but we can’t make excuses. We just have to come out and get better.”

Shafter, which came into the game devastated by injuries, started four sophomores and three freshmen.

“We’re young but we saw the upside of what we can do,” Pierucci said. “It’s ugly at times but on the whole I was very happy with the way we flew around and really played with less thinking and more playing.”

Dozhier, who announced on social media on Friday that he had surgery to repair his broken collar bone, is expected to return to action in 4-6 weeks.

Thankfully for Shafter it made through Friday night’s action without suffering any more injuries.

“That’s big,” Pierucci said. “Knowing that we’re going to have the same guys in the locker room that you started with on Friday at least allows us to game plan the way that we should. I know for the coaches and players getting through this game without losing anyone is kind of a sigh of relief.”