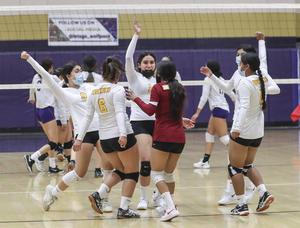 Based on the way the Mira Monte volleyball team played against Ridgeview on Thursday night, you never would have been able to tell that the Lions had been without their head coach Jenae Long all week heading into the non-league match. Based on the way the Mira Monte volleyball team played against Ridgeview on Thursday night, you never would have been able to tell that the Lions had been without their head coach Jenae Long all week heading into the non-league match.

Despite not having Long around to run practices and help iron out the kinks that plague most teams early in the season, Mira Monte looked in midseason form, sweeping the Wolf Pack 25-12, 25-11, 25-16.

“I’m super proud of these girls right now,” Long said after the match. “Unfortunately, I’ve been out for this whole week due to a surgery I had on Monday, so they’ve been running their practices not having me as their coach. What they did tonight just shows that they’re able to find the leadership and maturity and step up and handle business. It was awesome to see.”

The Lions (2-1-3) dominated the match from start to finish. They only trailed one time in any of the three sets. That was a one-point deficit early in Game 2. Mira Monte responded by scoring 17 of the next 18 points to take command of the set.

It was a night full of big runs by the Lions, who played well in all phases of the game.

But there was one area they really shined.

Mira Monte served 16 aces, including a whopping 10 by Jeimmy Valdenebro.

The talented middle blocker turned in a spectacular performance. In addition to serving 23 balls that ended with Mira Monte winning the point, she registered six kills and two blocks.

“My JV coach, Heather, she talked to the girls about finding an alter ego on the court,” Long said. “And Jamie said her alter ego was the Hulk. She wanted to bring the Hulk on the court. So, after Jeimmy had that string of great serves she came off the court and said, ‘I found my Hulk coach.’ It was just finding her aggression and finding her ability to put her strength behind her serves and her hits. And that’s what she did tonight.”

Valdenebro wasn’t the only Lion to play extremely well.

Jacqueline Ayala had the swing of her powerful right arm dialed in for pinpoint accuracy. Throughout the match, she hammered cross-court shots that were too hot for Ridgeview to handle. Most of her hard spikes that weren’t touched landed inbounds. The majority of her other shots ricocheted off defenders and then landed out of bounds.

Ayala tallied a match-high 12 kills. Most of her points came off perfectly placed passes from setter Valerie Cardenas, who finished with a match-high 11 assists.

“I think we did really good,” Valdenebro said. “…I feel like everyone was on it. They give it their all in practice and it showed on the court today. I’m just really proud of our team.”

While Mira Monte performed like a well-oiled machine, Ridgeview struggled with its play, like many high school teams do the first week or two of a new season.

Defensively the Wolf Pack struggled throughout the night with its return of serve and letting playable balls drop because of a lack of communication.

Ridgeview’s offensive attack didn’t have its timing down, leading to numerous kill attempts being hit into the net or out of bounds.

“We made a lot of mistakes,” Ridgeview coach Camille Ramirez said. “We have a lot of things we need to work on. Mira Monte played well…It was our first home game so there might have been some nerves involved maybe but we can play a lot better than we did, which is the frustrating part.”

Long was on the opposite end of the emotional spectrum after the match. She said it was the best her team had played so far this season.

“I’m blown away by the way they played tonight,” Long said. “They’ve basically been coaching themselves the past few days. I have 11 seniors and the maturity definitely showed tonight.”