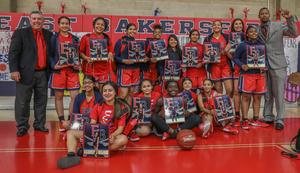 Make no mistake, there is a lot of talent and skill on the East High girls basketball team.

However, that hasn’t been the primary reason for the Blades current magical post-season run. Make no mistake, there is a lot of talent and skill on the East High girls basketball team.

However, that hasn’t been the primary reason for the Blades current magical post-season run.

East punched its ticket to the CIF D-V state championship game by claiming a dominating 56-42 victory over visiting San Diego-Madison in the SoCal Regional title game on Tuesday night.

“Our kids face so much adversity every day,” East coach Bobby Sharp said. “They’re tough. They’re gritty. And they love to win. They picked it up. They got their mojo going. Once we won the section, they believed that we may be able to win this thing. And look at where we’re at. It’s incredible.”

Kanya Patterson scored 18 of her game-high 25 points in the first half as East jumped out to 31-15 halftime lead before cruising to its eighth straight victory.

“I came out with the mindset that I just want to win and take it all the way for not just me but for my family and my school and the whole east side,” Patterson said. “We’re making history. I give all thanks to God for giving me the talent to play the game.”

The Blades (23-9) will play NorCal champion Ross-Branson for the D-V state championship at the Golden 1 Center in Sacramento on Friday. The title tilt is scheduled to tipoff at 10 a.m.

Branson (26-9) earned a spot in the state final by beating top-seeded Cottonwood-West Valley 57-48 on Tuesday night.

East is trying to become the first girls high school basketball team from Kern County to win a state championship.

Patterson, who is averaging 19.5 points per game during the playoffs, made sure the Blades got their shot at making history with a stellar all-around performance against Madison.

The 5-foot-1 senior guard dazzled the large enthusiastic crowd inside the East High gym with an array driving layups, floaters in the lane, and high-arching three-pointers from the corner.

“I told coach before the game; she’s got that look in her eye,” Sharp said. “She knows what time it is. She’s a bigtime player. If there’s a better player in D5 in California I want to see her.”

Seemingly helpless to stop Patterson from scoring playing a traditional man-to-man or zone defense, the Warhawks went to box-and-one midway through the first quarter.

That tactic slowed down Patterson a bit but opened the floor for the Blades other players, who shot the ball extremely well all night long.

Serina Covarrubias and Samantha Garcia both made two three-pointers.

Covarrubias fueled a 10-2 run at the start of the third quarter with back-to-back three-pointers from the left wing.

Her second make from long distance extended the Blades lead to 24 points and put the game out of reach for a Madison squad that scored only 21 points through the first three quarters.

East’s tenacious defense had 12 steals for the game, many of which were converted into east transition baskets.

“We try to put pressure on the ball and then when somebody picks it up, we attack,” Covarrubias said.

Imani Moore led the Warhawks (18-18) in scoring with 20 points. Cameron Smith chipped in 12 points for Madison, which had its three-game winning streak snapped.

“It’s hard to explain what this means to our kids,” Sharp said.  “We’ve worked so hard to get here. If you believe and you work, anything is possible.”

East averaged just three wins per season during the 12 years prior to Sharp taking over the program in the fall 2016.

The Blades have averaged more than 18 wins a season after Sharp’s first year in charge.

“The first day I came here I told the group we’re going to win a section championship,” Sharp said. “That’s our goal. That’s our mission. That’s what we’re after. And we’ve been close three years in a row. Finally got it done. We never dreamed of this. This is just amazing. It’s incredible.”