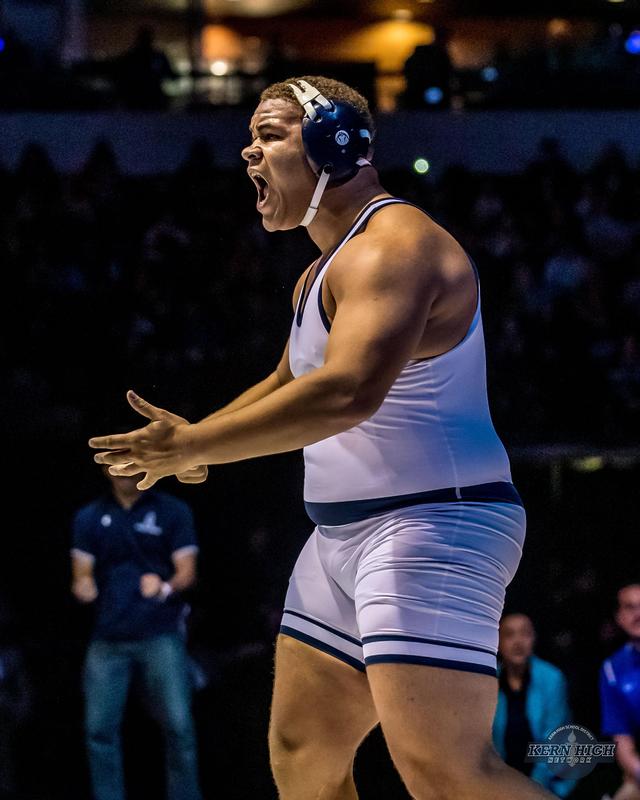 Josiah Hill has experienced enough adversity during his young life to let anything that happens on the wrestling mat rattle him.

Josiah Hill has experienced enough adversity during his young life to let anything that happens on the wrestling mat rattle him.

The Bakersfield High senior demonstrated his propensity for remaining cool and calm under pressure during the heavyweight final of the CIF State Wrestling Championships on Saturday night at Mechanics Bank Arena.

Trailing 2-1 after getting taken down and rolled briefly onto his back by Gilroy’s Nico Villarreal early in the first period, Hill appeared about to go down again early in the second period.

Instead, the extremely athletic and agile Hill amazingly scrambled out of the precarious situation and quickly turned the tables on Villarreal, scoring a takedown before garnering a pin moments later.

Despite the way things looked, Hill said that he was never worried that he was in jeopardy of losing the match.

“I’ve been in that position a lot with my wrestling buddy Justin Darter,” Hill said, “I could hear people saying, ‘oh, oh’. I was just keeping calm and doing what I thought was right...I never feel like I’m in trouble in a match. Just because I know where I’m at. I know what I’m capable of. I just have the confidence to know I can get myself out of the situation.”

Following the bout, Hill turned and faced his family and friends in the arena and raised his hands in the air before bumping his chest a couple of times with his fist.

“This was probably the highlight of my year having everybody I love in the stands, getting to point at them,” Hill said. “And them seeing me win is just an unexplainable feeling.”

One person that unfortunately wasn’t there to see Hill’s big win was his father, who was killed in a motorcycle accident a few weeks after Hill placed seventh at last year’s state championships.

Hill’s mother passed away when he was 12.

But Saturday night it was all smiles for the seemingly always happy and upbeat new king of the 285-pound weight division.

“I’m still in awe and shock. I don’t have words for it,” Hill said moments after becoming the first heavyweight in Bakersfield High’s long and storied wrestling history to win a state title. “It was monumental win for my career.”

Hill came into the state tournament with an impressive 38-1 record and ranked No. 1 in the state.

He lived up to that top billing with a dominating performance throughout the three-day event.

Three of his five matches ended in pins, including. The other two he won by scores of 10-0 and 9-5.

Among the five wrestlers Hill defeated were the No. 2 (Villarreal), No. 4 (Malachi Taylor of Lakewood-Mayfair), and No. 9 (Arturo Ojeda of San Jacinto) ranked 285-pounders in the state.

Watching Hill win the state title was an emotional experience for Varner.

“I’m just so excited,” Varner said. “It’s hard to hold back the tears a little bit. Josiah Hill, state champion. It’s amazing and it couldn’t have happened to a better kid. If anybody deserved it, it was him. He worked his tail off. He believed he could do it. Just the work ethic. The drive. His athleticism. His size. You don’t get that showing up too much in your (wrestling) room. Just an amazing kid.”

Hill will continue his wrestling career this coming year at Arkansas-Little Rock.

“They are getting a good one,” Varner said.