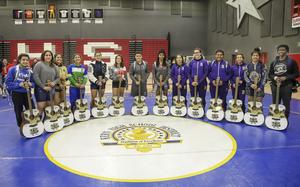 Check Out the Full Gallery HERE

There were multiple reasons for Yasmine Scherer to be highly motivated when she took the mat for the girls 126-pound final of the South Yosemite Conference Boys and Girls Wrestling Championships on Wednesday night at North High.

For starters, the North High sophomore, ranked No. 2 in the Central Section in her weight class, wanted to improve her impressive won-loss record and ensure a top seed for the D-3 Divisional Championships later this month.

But the thing that might have inspired Scherer the most to go out and claim a dominating victory over Mira Monte’s Yazmine Perez was the custom-made guitars being handed out to the winners of the event.

“This year I wanted it because I was on it,” Scherer, one of the five wrestlers depicted on the guitars, said.

With the win, Scherer who qualified for state last year but didn’t medal, improved to 3-0 with three pins this season against Perez, who is ranked No. 3 in the section.

“I got out there and left it all on the mat,” Scherer said after pinning Perez in one minute and 18 seconds. “That’s what I try to do.”

Scherer was among several highly ranked girl wrestlers to live up to their lofty billing.

All four girls ranked No. 1 in the section in their respective weight divisions took home guitars.

Frontier’s Alyssa Valdivia, one of the four, claimed a 15-0 technical fall victory over Golden Valley’s Destiny Dominguez in the 106-pound championship match.

“I had my mind set on what I wanted, and I got it,” Valdivia said.

No. 1 ranked Aliana Lefotu turned in a better result for the Bulldogs in the 137-pount title bout, pinning Foothill’s Jessica Manriquez in two minutes and 48 seconds.

In a battle of No. 1 versus No. 2, top-ranked Orianna Morales of Bakersfield High defeated Golden Valley’s Audrey Chavez, 4-0.

“I just wanted to go out there and do my best,” Morales said. “I think I did pretty good. There are some things I do need to work on, but I think I deserve it.”

Thirteen different schools were represented in the girls finals. Golden Valley and Ridgeview led the way, with both schools sending six girls to the championship round.

Eight schools had boys qualify for the finals. BHS had the most with eight, including Josiah Hill, the state’s No. 1 ranked heavyweight.

Despite the positive outcome, Hill wanted to get a pin.

“It was a good match. There are just some things I need to clean up so I can finish how I need to,” Hill said.

Like Scherer, Hill was excited to take home a guitar.

“It’s nice because I have a cowboy hat and now, I have a guitar,” Hill said. “Now I’m going to have to learn how to play it. Get my cowboy on.”

Arguably the most anticipated match of the night, the 160-pound boys championship bout, lived up to the hype as BHS’ Jaden Sanchez ranked No. 14 in the state) narrowly edged Golden Valley’s Dominick Leon (No. 20 in the state), 6-4.

With the match tied 4-4, Sanchez got a takedown with 20 seconds left in the final period to earn the hard-fought victory.

“I knew going into the match it was going to be a tough one,” Sanchez said. “I’ve known Dom for almost all my life. We grew up wrestling together. I knew it was going to be tough no matter what. I tried to go in every period and fight as hard as I could.”

Another fierce battle occurred in the 126-pound championship match. North’s Anthony Ornelaz was the victor by the slimmest of margins, 12-11 over Frontier’s Johnny Appleton.

“I’ve put a lot of hard work and effort into the season,” Ornelaz said. “It was a good match.”

Appleton came into the match ranked No. 26 in the state.

“It feels really good,” Ornelaz said of the win.”