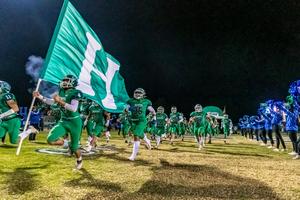 Photos by Mark Duffel
By Vincent Perez    Two fourth-and-goal stops determined the outcome of a lopsided 40-15 upset playoff loss for Highland.
The Scots (9-2, 5-0 SEYL) seemed outmatched in their Division III quarterfinal against the Golden West Trailblazers from Visalia (7-4, 2-3 West Yosemite League).
Scots head coach Michael Gutierrez said he thought his players could put the touchdowns away in the first half, hoping to respond to Golden West. Trailing 7-0, the Scots were denied a touchdown at the one-yard line by the Trailblazer defense on their first drive. They would never catch the ‘blazers.
“It’s frustrating, but it’s something we can build on next season,” said Gutierrez.
“They were better than us on some sides, so we have to come better prepared.”
The offensive plays that were usually go-to for quarterback AJ Cleveland, Nick Salas, Dizzy Brown and Shabazz Muhammad were not there during the game.
“We got to execute better,” said Gutierrez. The Scots were prevented again from scoring with about 5 minutes left in the second, down 20-0 already.
Cleveland attempted a pass to Muhammad that he catches nine of ten times. On this chance, the ball slipped through his fingers. That touchdown would have given them presumably 7 more points going into halftime, on top of the first missing 7 points.
“They definitely played hard, and they started off better than us,” said Gutierrez.
The Scots’ defense did not even take the field before the troubles began. After the Scots committed an infraction on the opening kickoff, the Trailblazers only needed three plays and a minute and 42 seconds to score on their first drive.
The Scots’ worst enemy was six-foot-one running back Lonnie Wessel. Wessel ran the ball as many times as he could, weaving in and around Scot defenders. He totaled 214 yards on 16 carries and ended with three rushing touchdowns and a 2-point conversion which put the Scots away in the fourth.
It took almost two full quarters for the Scots to respond but they showed that they have heart. With 40 seconds to go in the first half, and after two generous facemask plays, which totaled 30 yards of penalties, Cleveland threw a signature corner touchdown pass to Salas. The Scots were down 20-7 but seemed to be fighting back.
Four minutes into the third, the Scots assumed they had the Trailblazers on the ropes, facing a fourth and 15 near midfield. How wrong they were; A fake punt pass play to Jacob Salazar was called by Golden West’s coaching staff, earning a first down.
On the very next play, Wessel turned around the whole field to the left and scored a 30-yard touchdown, putting Golden West up 26-7 late in the third.
The rest wouldn’t get better for Highland.
On the following kickoff, the ‘blazers recovered an surprise squib kick and scored another touchdown.
To top it off, the ‘blazers seemed to rub the Scots nose in it, scoring a touchdown and 2-point conversion, immediately after the Scots’ touchdown late in the fourth. The score was 40-15 and you could feel it.
The Scots’ demeanor may have been down, but they played their hardest to the last whistle. Yet, Cleveland and Muhammad were uncharacteristically inaccurate. Credit is due upon the ‘blazers defense.
Cleveland threw 6-for-16 on 20 yards, and he rushed six times on 66 yards. He was not his usual self because of the wall-like Golden West defense. Muhammad totaled 75 yards, but the bulk of his yards were on kick returns, not receptions.
Vidal ran the ball 13 times on 71 yards, the leading rusher for the Scots. Cleveland did find Salas twice in the endzone but the ‘blazers offense was too efficient.
“Hats off to Golden West, they’re a very solid team,” said Gutierrez.
On paper, the Trailblazers were ranked lower in the state compared to the Scots, but they came to play.
“They do what they do very well,” said Gutierrez. “Once they got momentum, they’re very hard to stop,” he added.
Vidal, Salas and Muhammad completed their final seasons as Scots, graduating this year. Yet, Highland’s future is in great hands in two important juniors.
“We’re really excited to have the cornerstones of AJ and Dizzy next year,” said Gutierrez.
Cleveland sees his teammates as brothers and hopes they stay in touch after graduation.
“Let’s not just drop each other off just because football is done; We’re family,” said Cleveland.
The Scots finish the season 9-2 and unbeaten in league play (5-0).