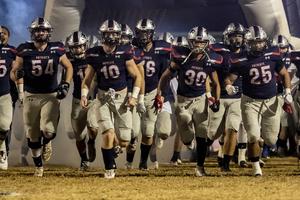 With starting quarterback and leading touchdown producer Haden Mann out due to injury, the Liberty High football team went into its Central Section Division 1 quarterfinal against Clovis West looking for ways to score points.
As it turned out, Patriots senior Dylan Tooker had the perfect the solution, tallying touchdowns on offense, defense and special teams to lead third-seeded Liberty to a 38-14 victory over the visiting Golden Eagles on Friday night. With starting quarterback and leading touchdown producer Haden Mann out due to injury, the Liberty High football team went into its Central Section Division 1 quarterfinal against Clovis West looking for ways to score points.

As it turned out, Patriots senior Dylan Tooker had the perfect the solution, tallying touchdowns on offense, defense and special teams to lead third-seeded Liberty to a 38-14 victory over the visiting Golden Eagles on Friday night.

Despite being outgained 241 to 234 yards, the Patriots (10-1) were in complete control from start to finish.

The explosive and versatile Tooker made sure of that.

After Clovis West (4-8) cut an early 14-0 Liberty lead down to 21-14 on a 23-yard touchdown pass from Bradley Senneway to David Pierro with 30 seconds left in the first half, Tooker returned the ensuing kickoff 75 yards for a TD.

Late in the third quarter Tooker extended the Patriots advantage to 35-14 with a 19-yard touchdown run.

That score put the game out of reach for an Eagles squad that was held to only 39 net yards in the second half.

“Tooker scored on all three phases of the game,” Liberty coach Bryan Nixon said. “…That’s pretty rare. He’s a good ballplayer. He had some momentum changing plays for us. I’m really pleased with how he played, but he’s played that way all year long.”

Liberty will play #2 Clovis Buchanan, a 43-7 winner over Bakersfield High on Friday night, in the semifinals. Last year the Patriots claimed a 24-23 victory over the Bears in the D1 semifinals. Earlier this season Buchanan beat Liberty 19-17.

Mann’s replacement, Carson Woods, turned in a solid effort against Clovis West, connecting on 11 of 18 pass attempts for 126 yards and one touchdown.

The sophomore, making his varsity debut, completed his first three passes for short gains before finding Jason Oliver wide open down the middle of the field for a 23-yard touchdown pass on the last play of the first quarter.

Twelve seconds later, Tooker intercepted a short pass by Senneway and rumbled 20 yards for a touchdown.

Senneway rebounded from that miscue and fired a pair of first-half touchdown passes to Pierro, who had 8 receptions for 151 yards prior to halftime.

The Patriots defense, which gave up 184 yards through the air in the first half, didn’t allow the dangerous Pierro to make a single catch in the second half.

“We talked about doing our job a little bit better (at halftime),” Nixon said. “I think we let him get out of contain a couple of times. I just think we just played better in the second half.”

Senneway was sacked three times and had to leave the game late in the third quarter.

Prior to heading to the sideline, the senior quarterback was 16 of 29 for 203 yards passing. He had two touchdowns and two interceptions.

Oliver finished with 3 receptions for 59 yards to help Liberty defeat Clovis West for a sixth straight time. The Patriots beat the Golden Eagles 17-7 during the regular season.

“I was just happy for our kids to come off a bye week like that,” Nixon said. “They played really hard. They had a little adversity with Haden not being able to play. Carson stepped up and I thought they did a good job.”

Tooker was also impressed with what he saw from Woods.

“I was super confident in him,” Tooker said. “I though he had a great week of practice. He caught on really well. And just trusted him. We all trusted him. He did pretty good tonight.”

Woods admitted that he was a little bit nervous at the beginning of the game but that he knew he had to step up and help Liberty advance on in the playoffs.

“All my teammates helped me execute and we came out with a win,” Woods said.

Clovis West coach Tim Randall felt that his team hurt itself with turnovers and a lack of execution of offense.

“We gave them a short field too much and that’s a really good football team,” Clovis West first-year coach Tim Randall said. “And when you do that sometimes it’s not going to be in your favor. It was a tough night.”

Liberty heads into the section semifinals against Buchanan having not lost a game since getting narrowly defeated by the Bears two months ago.

“We’re going to work hard,” Tooker said. “Harder than we ever have before. And we got to get revenge on them.”