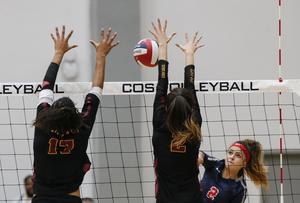 In fact, the Patriots appeared to be in deep trouble.

However, before they took the court for the start of Game 2, Liberty coach Amy Parker reminded her players about how quickly things can change.

And just like that everything turned around for the Patriots.

Second-seeded Liberty rallied from a set down to get the brink of victory before losing a five-set thriller to the Golden Eagles at College of the Sequoias’ Porter Field House.

“We played Arroyo Grande on Thursday and we won Game 1, 25-10 and then they beat us in Game 2,” Parker said. “I used that as a reminder. ‘Hey, Arroyo Grande played very poorly in Game 1, and came around and beat us in Game 2. So, it’s possible. You just have to get out there and fight. Nobody is going to hand anybody a “Valley” championship.’”

Brynna Slayton had 11 kills, 16 assists, and four aces for Liberty, which was attempting to win its first section championship since 2016.

Jill Penner tallied 12 kills and 21 assists for the Golden Eagles, who improved to 11-6 versus Liberty since 2008.

Despite the 3-0 margin of victory, it was a close match with Liberty losing the trio of games by a combined total of 10 points.

This time things were even more competitive as both teams battled relentlessly throughout the match for every point.

Things really heated up in Game 4.

Leading two games to one, Liberty (26-6) jumped out to an early 6-1 lead on the strength of the passing of junior setter/right side Carisa Barron and hitting of Slayton.

Propelled by a 7-0 run Clovis West quickly erased the Patriots five-point advantage and claimed 8-6 lead for itself.

The Golden Eagles stayed in front until they committed a double contact violation that tied things, 17-17.

Clovis West immediately atoned for that miscue, scoring the next two points.

They never relinquished that lead, closing out the game with a hard kill by Penner.

Game 5 was close at the beginning with both teams taking a turn leading by a point.

Later in the set, sparked by three Alexandra Wright kills, Clovis West pulled out to an 11-7 lead.

Liberty responded with a 3-0 run capped off by a seismic blast by Barron.

But on the next ball in play Barron Barron narrowly missed long and out of bounds with a kill attempt to far, back corner.

Leading 12-10, the Golden Eagles scored the next three points to seal the match victory.

Despite the loss, Parker was proud of her team.

“The way we responded after Game 1, you couldn’t have asked for anything more,” Parker said. “Before you come into a match like this you always tell your kids, no matter what happens you want to leave it all on the court. And we left it on the court. Other than Game 1, it was a battle all night long.”

Barron, who like Slayton played the entire match, finished with 6 kills and 14 assists.

“I think everyone played really hard,” Barron said. “Everyone really wanted it, but they’re a good team and they put really good balls on the floor. There was nothing we could do about that.”

Most of the post-game talk centered around Liberty’s response to getting beaten soundly in Game 1.

“We were not going to let that happen again because that is not the way that we play,” Barron said. “And we just came back and fought really hard and gave it our all. Left it all on the court.”

Liberty’s senior libero Jaleesa Caroccio was a big reason the Patriots battled back after the poor start to the match. She had 24 digs and 4 aces.

“It’s difficult to come out after a hard loss like that, but I’m so proud of everyone for battling, coming back, fighting all the way,” Caroccio said. “I thought we fought all the way through the fifth game. Obviously. it wasn’t the outcome we wanted but it was a good fight.”