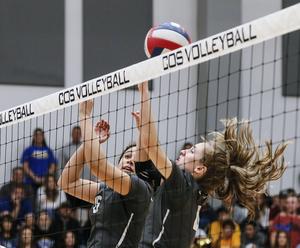 VISALIA--Hidden beneath the tears and sadness, the Stockdale volleyball team felt a well-deserved sense of pride at the conclusion of its Central Section Division 2 championship match against Bakersfield Christian on Saturday night.

After falling behind two games to zero to a stout Eagles team, the Mustangs showed their moxie, rallying to win Games 3 and 4 before losing Game 5 by the narrowest of margins.

The fifth set provided ultimate high stakes drama for the near capacity crowd packed inside College of the Sequoias’ Porter Field House to watch the action unfold.

With a coveted section title hanging in the balance, the two teams traded the lead four times and were tied 13 different times before a hard kill by Ashley Herman gave BCHS a 17-16 lead. The Eagles (29-5) clinched the victory moments later when Stockdale (27-9) deflected a BCHS shot out of bounds.

Kami Marion had 19 kills, 9 blocks, and 4 aces for the Mustangs, who staved off two match-points in Game 3 to stay alive.

Marion was the driving force behind Stockdale’s big comeback. The athletic 5-foot-8 senior middle blocker used her acute sense of timing and outstanding leaping ability to continually score points with hard blasts through and off BCHS’ blockers.

“All I can say is that I’m just really proud of how hard we fought tonight,” Marion said. “We just all wanted it so much. We put our hearts out onto the court.”

Grace Townson recoded 10 kills and 6 blocks and Morgan Cole added 9 kills and 20 digs for the Mustangs.

Stockdale got big contributions from a plethora of other players too.

The Mustangs needed all the help they could get to keep from getting swept by the Eagles, who came out strong at the onset of the match and continued to play extremely well all through the first two games.

Needing to win Game 3 to stay alive, Stockdale fell behind 23-18 and looked to be in deep trouble.

However, after two BCHS unforced errors made it 23-20, Marion registered back-to-back kills to make it a one-point game.

Later she tallied consecutive points again to draw the Mustangs even with the Eagles, 24-24.

Perier followed by scoring with a two-hand push shot. The next ball in play ended with Herman making a hitting error that sealed the Game 3 victory for Stockdale.

The momentum the Mustangs gained from that win didn’t carry over at all into Game 4. BCHS jumped to a quick 4-1 lead before a renewed defensive effort and some clutch hitting allowed Stockdale to draw even and then eventually take the lead, 12-11 on ace by Sammy Gradowitz. BCHS fought back to tie things, 17-17. But the Mustangs dominated the rest of the way, going on an 8-1 run to pull away and win the set.

That set the stage for the match’s dramatic conclusion.

“I’m so beyond proud of them,” Stockdale coach Maria Collatz said. “Most teams, where we were, could have just crumbled and walked out of this gym after two games. They didn’t and they fought back in that third (set). Then they battled in the fourth. And then they battled in the fifth. It was just such a see-saw (match)…It went their way, but I couldn’t be prouder of this group of 15 girls.”

“That’s Stockdale volleyball,” Jackson said. “Determination. Battling. Heart.” “…I am just really super happy that we made it here. I thought we fought really hard. I’m okay with this. I’m happy with how I’m ending my senior year. This is great.”

“It means a ton to the girls,” BCHS coach Matt Touchstone said of winning the D2 title. “That was one of our goals at the beginning of the year. They really came together as a group and really bought into, we could do it, and then what steps we take to actually make it happen.”