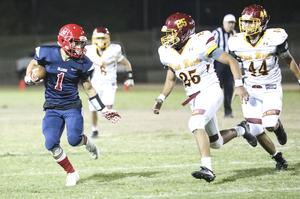 “We were looking for a way to get back on track after the bye week and get rolling into league,” EBHS Head Coach Kasey Tittlemier said. “We were looking for a way to get back on track after the bye week and get rolling into league,” EBHS Head Coach Kasey Tittlemier said.

EBHS was led by Senior QB William Ball who finished with 5 total touchdowns (2 rushing and 3 passing) as well as contributing on the defensive side with an interception.

The Lions started the game with a drive that was capped off by a field goal from MMHS’s Raul Torres to put them on top 3-0 but those were the only points they would get on the board for the night.

The Blades answered Mira Monte’s opening drive with monstrous running from Senior RB Nick Martinez to set up his team inside the red zone.

William Ball would punch it in from 2 yards out to put the Blades ahead 6-3 and Ball refused to slow down.

The senior crossed the goal-line once more on their following drive from 9 yards out to help the Blades to a 14-3 lead with seven minutes remaining in the first half.

Ball and the Blades continued to keep their foot on the gas the entirety of the contest.

William Ball connected with WR Michael Rodriguez for two touchdowns on the night with one coming from 22 yards out at the end of the 2nd quarter and another coming from 30 yards out in the final period.

“We’ve been playing together since 8th grade so we’ve had the connection for a while now,” Ball said when asked about the duo of himself and Rodriguez.

East Bakersfield moved to 5-1 on the season behind first-year head coach Kasey Tittlemier and remain tied for first with Highland in the SEYL.

“It’s all these kids,” Tittlemier explained. “They put in the work and I’m just a coach trying to put them in the right position to succeed.”

Their schedule does not get any easier though in the coming weeks as the SEYL has seemingly become unpredictable.

The Blades will stay at home next week against South who won their first league matchup against Foothill, 70-35.