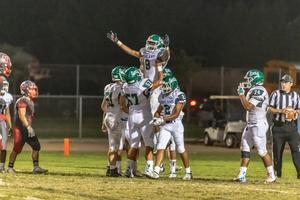 Highland coach Michael Gutierrez just wanted to see improvement out of his team when it took the field against North on Friday night. He got his wish and then some.

The Scots, led by the spectacular play of quarterback AJ Cleveland and wide receiver Shabazz Muhammad, turned in an impeccable all-around performance against the Stars.

Highland coach Michael Gutierrez just wanted to see improvement out of his team when it took the field against North on Friday night. He got his wish and then some.

The Scots, led by the spectacular play of quarterback AJ Cleveland and wide receiver Shabazz Muhammad, turned in an impeccable all-around performance against the Stars.

Cleveland registered career highs in passing yards (356) and passing touchdowns (6) while Muhammad torched the North defense to the tune of five receptions for 188 receiving and four touchdowns.

The duo’s big-time efforts propelled Highland to a 52-28 victory over the Stars at Eliades Field.

“We just want to get better each week,” Gutierrez said. “Our guys did a great job of just working. I think its showed that we were better than previous week. Having two weeks off and still being able to respond like this, is just great. And it’s great to know that our guys are continuing to work. Continuing to keep moving forward. We want keep getting better and make a push toward the end of the season.”

The game was the Southeast Yosemite League opener for both teams.

The Scots took control early and never trailed. After receiving the opening kickoff, Joey Vidal capped off an eight-play, 75-yard drive with a 23-yard touchdown run.

The Stars responded immediately with a 71-yard drive for a touchdown that tied the score.

Despite allowing three second quarter touchdown passes by Cleveland, including two to Muhammad totaling 82 yards, North remained competitive in the first half.

However, early in the third quarter Cleveland and Shabazz resumed their aerial assault, hooking for touchdown passes of 46 and 44 yards to extend the Scot’s lead to 45-21.

That was more than enough of a cushion to ensure a Highland victory, its first against the Stars since 2012.

North (4-2, 0-1 SEYL) has been Highland’s biggest nemesis in recent years.

Two years ago, a loss to the Stars was the only blemish on the Scots’ regular season record. It caused the Highland to finish in a three-way tie for the SEYL championship, instead of winning it outright.

Cleveland and Shabazz were determined that this season’s showdown would turn out differently.

Cleveland surpassed his career high for passing yards in a game by 100. He completed 11 of his first 13 passes for 211 yards.

“This was definitely the best game of my (high school) career,” Cleveland said. “I don’t think I’ve ever had a game like this.”

The junior signal caller has now thrown for 13 touchdown passes in last three games. North’s defense did little to slow him down.

“Everything was working, pretty much,” Cleveland said. “I know who to throw to on what plays. I know who’s where. I know what’s going to open up. The (offensive) line gave me plenty of time. Shout out to them.”

A big chunk of Muhammad’s huge yardage total came after the catch. The 5-foot-11 speedster continually broke out of North tackle attempts for big gains.

“I think Shabazz is very underrated, as far as his playmaking,” Gutierrez said. “People don’t realize how great of a football player we have here. Making plays after the catch. Being able to beat guys deep. He showed tonight why he’s a complete receiver. And that’s why we love the guy. He just plays so hard.”

Muhammad’s impact wasn’t solely on offense. He had an interception in the second quarter.

“We came together as a team and we executed,” Muhammad said. “We dominated.”

The Stars managed only seven points and 97 yards of offense in the second half.

“In the first half our defense was playing slow,” Muhammad said. “We weren’t getting to the ball. At halftime we had a talk. We came out and we handled business.”

North was without starting quarterback Titus Liest for the entire second half. Liest dislocated his throwing hand in the first half. He pulled it back in to place at halftime, but it quickly began to swell, forcing him to refrain from returning to action.

Alex Tejada rushed for 93 yards on 12 carries and Brian Dean carried the ball 15 times for 71 yards and two touchdowns for North, which had its four-game winning streak snapped.

“Great win for coach Gutierrez and Highland,” North coach Norm Brown said. “They outplayed us. It was a great battle in the first half, and then it got away from us in the third quarter.”