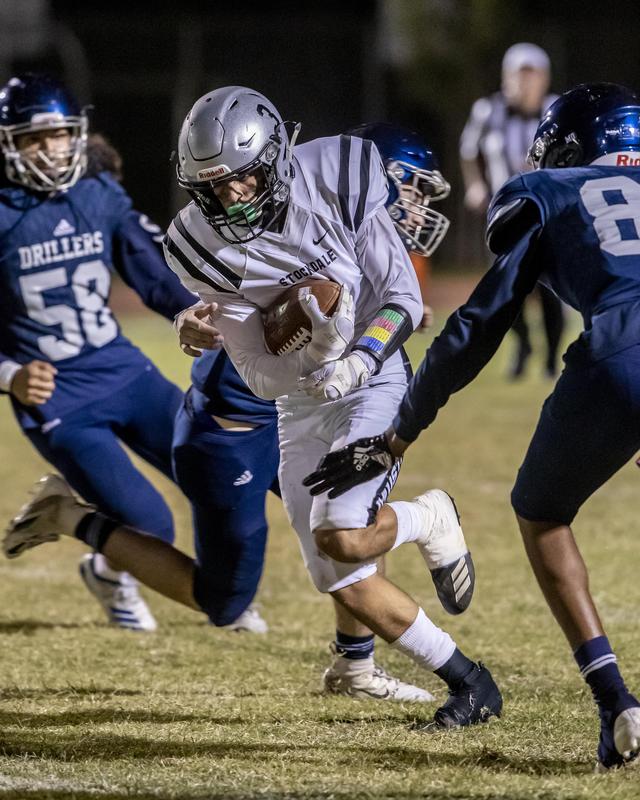 “These kids deserve it,” said Stockdale head coach Brett Shelton. “It’s a great feeling. I think every coach loves it for the kids more than anything. These (players) see that the hard work does pay off and it’s been a grind. Especially those first two games of the season (the team) could’ve hung their heads, but they’ve dug in for each other and that’s what this game is all about, to come together as one.”

The Stockdale (4-2, 1-0 SWYL) defense showed up and showed out as they were able to score three touchdowns to help secure the win against BHS (2-4, 0-1 SWYL).

“I knew we had to make a big play in order to keep the lead up,” said Saez. “We needed this (win). I knew we needed this play not just for our team but our school.”

BHS was able to get out to a fast start opening its first offensive drive with a 70-yard touchdown run by senior Wesley Wilson, which would be the longest play of the game. Wilson would finish the game with 93 rushing yards on just five carries.

After the house-call by Wilson the defensive onslaught of scoring from Stockdale got them on the board as Adam Trujillo intercepted a pass and took it in for a touchdown from 12 yards out to tie the game up at 7-7.

The third defensive score by Stockdale came from a fumbled snap that flew over the head of BHS quarterback Ricky Easterwood Jr. Stockdale junior James Lucio scooped the ball up and took it in for a Mustang touchdown.

Another big play that led to a BHS touchdown occurred right before halftime as Easterwood completed a 58-yard touchdown pass to senior Elijah Lee. Easterwood would finish the game with 158 passing yards.

The Drillers had six separate 15-yard penalties called on them in the game that totaled 85 yards worth of penalty yardage.

BHS will look to get back on track and are scheduled to play at Garces Memorial High School on Oct. 11 at 7:30 p.m.

Stockdale will hope to extend its four-game winning streak as they are scheduled to host Centennial High School on Friday Oct. 11 at 7:30 p.m.

“We got to come out (against Centennial) with the same mentality that we came out with this game,” said Saenz. “We just got to ball out.”