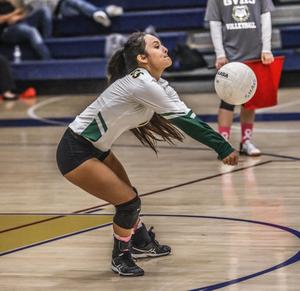 The last time the West High School volleyball team finished a season with a winning record the eight seniors on the Vikings current roster were all in third grade.

They were in fifth grade the last time West made the playoffs.

The last time the West High School volleyball team finished a season with a winning record the eight seniors on the Vikings current roster were all in third grade.

They were in fifth grade the last time West made the playoffs.

However, after struggling since the early part of the past decade, the Vikings are now clearly on the rise.

“We played really well as a team, West senior captain Zandrea Araneta said. “We went out there, fought hard, and showed our skills.”

The resurgent Vikings dominated the match except for the middle part of the first set and most of the fourth set.

Leading two games to none, Cotton, a 5-foot-7 junior outside hitter, sat out most of the third set.

The Vikings missed her athleticism both defensively and when trying to finish off points against a determined Bulldogs team.

With Cotton on the floor, and even sometimes with her on the bench, West was clearly the better side.

The Vikings played a much cleaner match than Golden Valley, which struggled for prolonged stretches of time with its passing and hitting.

The Bulldogs spiked the ball into the net 15 times and hit it out of bounds, while attacking, on 16 occasions.

West took advantage of a rash of Golden Valley miscues to post lopsided wins in Game 2 and Game 4.

The most hotly contested game was the first one. The Vikings jumped out to a 11-5 lead on strength of two kills each by Cotton and Dominguez.

The Bulldogs fought back and eventually tied things 12-12 on a hard, crosscourt smash by Kaitlyn Medellin.

West quickly answered with a 9-2 run, featuring two kills and a block by Talyiah Mosley, to re-take command of the game.

The Vikings’ strong end-of-Game 1 play carried into Game 2, where they bolted out to 10-0 lead propelled by four Stephany Castillo aces.

On the verge of a sweep, West came out flat at the start of the third set. Meanwhile, Golden Valley, firmly resolved not to go down quietly, started off the third set with a renewed vigor.

The Bulldogs raced out to 6-1 lead before Vikings finally got rolling, scoring eight of the next 10 points to edge ahead 9-8.

The West lead was short-lived. Golden Valley responded by going on a 6-0 tear.  The Bulldogs soon expanded their advantage to 24-13 and then held off a late West rally to win the set.

Game 4 unfolded much like Game 2, with West dominating from start to finish.

Castillo, the Vikings starting setter, finished with a match-high 28 assists. Erica Barraza had 30 digs for West, which reached double figures in wins for a season for the first time since 2011.

“We’ve been working really hard this year and it’s paying off,” Araneta said.

West is 6-3 in its last nine matches.

West coach Kelsey Graham believes Thursday win was an important one for her girls.

“We’re now 3-1 (in the SYL) and our confidence is getting more and more hyped,” Graham said. “They’re talking more. This is a just a steppingstone…West hasn’t been in the playoffs in a long time and I believe we’re going this year.”

Tierra Haney led Golden Valley in kills with eight. Medellin added six kills and Andrea Frausto chipped in 20 assists for the Bulldogs, who dropped to 0-4 in SYL matches.

“We showed flashes of what we’re capable of,” Golden Valley coach Meladee Gardella said. “We just need get more consistency…That seems to be one of their things. They will get up eight points and then give away 10. That’s a mental thing.”