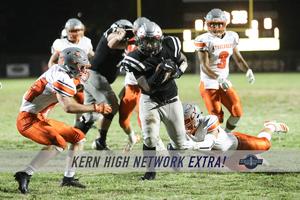 Jones not only got the first win of the season for the Mustangs but the sophomore lead the team to his first win as a varsity player on Friday night 21-7.

“It’s just a blessing to be out here to play with (my teammates),” said Jones. “I got to give a big thanks to my (offensive lineman) because they are the ones who did it for me. It feels good to know that I can trust my (teammates). We stay strong through the whole game no matter what the circumstances are and no matter what our record is.”

Jones was able to score for Stockdale (1-2)  late in the fourth quarter on a 3-yard rushing touchdown that would put them ahead of Atascadero (1-2) 21-0.

The sophomore running back’s 193-yards came on 29 carries in the game.

Stockdale was coming off a lack-luster performance last week against Clovis High school after giving up 41 points but bounced back with a strong defensive showing.

“We tightened a lot of screws,” said Stockdale head coach Brett Shelton. “We made a great goal-line stand--never die attitude. (Atascadero) snuck it in barely. Just the attitude is there. (The team) is being coachable.”

Atascadero senior Zyon Richardson put the Greyhounds inside the 10-yard line on a 59-yard punt return. Junior Jadon Prince would punch in a 1-yard touchdown run that would make the score 21-7 with 3:05 left in the game. Prince would finish the game with 75-yards rushing on 13 carries.

The Greyhounds have struggled the past couple of seasons as they have only won one game since week eight of the 2017 season. That one win came just last week as they defeated Buena High School 28-24 snapping a 13-game losing streak.

The play of the game would come with 4:20 left in the fourth quarter. Stockdale quarterback Jack Kaiser threw a long-ball down the Mustangs sideline to junior Loren Johnson who was able to tip the ball to himself for a touchdown. Johnson’s touchdown put the Mustangs ahead 15-0 at halftime after a successful two-point conversion.

“We have a good coaching core,” said Stockdale senior Elijah Hudson. “They teach us discipline. We don’t make the same mistakes twice. This week we focused on the little details of technique and we got that win.”

The Mustangs will travel on the road next week and are scheduled to face Independence High School on Sept. 13 at 7:30 p.m.

“There’s a lot of things we need to clean up,” said coach Shelton. “We do have some youth (and) some inexperience so the is a good experience for them. They trusted their coaching and from here on it’s just a process...We can’t get satisfied with one win.”

Atascadero will look to get back on the winning track and are scheduled to play Shafter High School on Sept. 13 at 7:30 p.m.