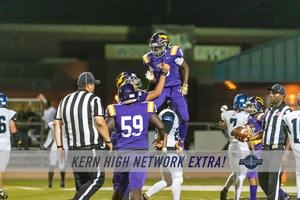 The Ridgeview High School football team showed just how explosive its offense can be against visiting Frontier on Friday night.

But only after some early-game miscues threatened to blow up the Wolf Pack’s chances at getting a win. The Ridgeview High School football team showed just how explosive its offense can be against visiting Frontier on Friday night.

But only after some early-game miscues threatened to blow up the Wolf Pack’s chances at getting a win.

Ridgeview rebounded from committing three first-quarter turnovers to amass 496 net yards and post a 63-43 victory over the Titans.

“We started out so bad,” Ridgeview coach Rich Cornford said. “Fortunately, early on our defense kept us in it. Gave us good field position. And then the offense started clicking. We found a personnel group that was really advantageous, and we were able to hit on all cylinders.”

Ridgeview quarterback Justin Hinzo was 16 of 25 for 259 yards passing. The senior signal caller threw three touchdowns and ran for another as the Wolf Pack registered its high point total ever in a game against Frontier.

“He’s got a heck of a strong arm and he does a good job with the RPO (run-pass-option),” Cornford said. “It’s really tough to defend that stuff. It’s nice that it’s working the way it’s supposed to work.”

Two of Hinzo’s scoring throws went to Zion Hall, who finished with nine catches for 101 yards.

Leading 50-29 at the end the third quarter, Hinzo was pulled from the game and didn’t play the rest of the night.

He credited his teammates and Cornford for his big night passing the ball.

“It was really just the linemen giving me the time, the receivers making catches, and Cornford making play calls that allowed me to make plays,” Hinzo. “We just got it done.”

Despite the cluster of early-game turnovers, Ridgeview (2-1) never trailed.

The game was tied 22-22 after Frontier scored on a 1-yard quarterback sneak by Israel Chaverria with 7:11 remaining in the first half.

The touchdown was setup by a 46-yard pass by Chaverria to running back Kaden Hernandez, who caught the ball in the flat and then rumbled his way to the Ridgeview 6-yard line.

Ridgeview (1-2) responded by scoring two touchdowns in the final two minutes and 39 seconds of the first half.

First, Amos zig-zagged his way through the middle of Frontier’s defense for a 21-yard TD.

Then after a three-and-out by the Titans offense, Hinzo zipped a 41- yard strike to Mekhi Deans before connecting with Hall for a 24-yard touchdown pass.

Ahead 36-22 at halftime, Ridgeview’s high-powered offense kept rolling in the second half, leaving little opportunity for Frontier to close ground.

“We have a lot of speed,” Cornford said. “And it’s tough to defend that speed in space.”

Ridgeview was without the services of leading receiver Shawn Allen. The junior running back/cornerback hurt his knee during the Wolf Pack’s Week 2 loss to Liberty. He’s is scheduled to have a MRI on Sunday.

Amos made up for the loss of Allen with an outstanding effort running the ball. Amos scored touchdowns on three of his final seven carries.

Like Hinzo, he passed for three touchdowns and ran for one.

The Titans offense’s biggest issue was its inability to capitalize on Ridgeview’s mistakes. Frontier scored after only one of the Wolf Pack’s four turnovers.

“Definitely not the way we wanted it to turn out, but I thought it was a good game most of the game,” Frontier coach Chris Bandy said. “...I’m proud of the kids for keeping the fight going and battling back and giving us a chance to come back.”

Cornford is happy that Frontier’s comeback attempt fell short and that his team is 2-1 after playing three quality opponents to start the season.

“We play a tough preseason schedule and to be where we are right now; we’re on the right track,” Cornford said. “Four turnovers though, we have to clean that up or were going to get ourselves in some trouble.”