Bulldogs defeat South 21-6 for their first victory since 2017 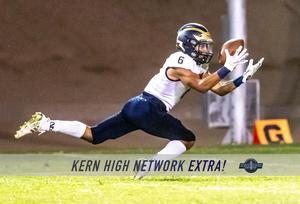 Just three players on Golden Valley’s roster, before Friday night’s contest at South, had experienced the feeling of a varsity football win.

The Bulldogs’ varsity football program was on a 12-game losing streak stretching back to their 2017 season finale at EBHS. Fortunately for GVHS, their team pulled off a 21-6 victory against the South High Rebels while putting an end to the dreadful streak. Just three players on Golden Valley’s roster, before Friday night’s contest at South, had experienced the feeling of a varsity football win.

The Bulldogs’ varsity football program was on a 12-game losing streak stretching back to their 2017 season finale at EBHS. Fortunately for GVHS, their team pulled off a 21-6 victory against the South High Rebels while putting an end to the dreadful streak.

Golden Valley Head Coach James Cain spoke on his guys getting into the win column.

“My boys had to get the first win and we knew it was going to happen. Honestly, I guess it was the best place it could happen... I’m super proud of their effort tonight and happy they got the win.”

The win was special for Cain, to say the least, as he graduated from South High and once played under Rebels’ Head Coach Cary Mills.

“I always love coming back to South High as a (former) student of this campus. I played for Coach Mills so it’s always love. A lot of things that he taught me as a young man I carry over for me now as an adult and a coach so it’s nothing but respect and love for him.”

Cain’s Bulldogs started the game off on the right foot despite failing to score on their first drive.

South took over at their 20-yard line but on their first play from scrimmage, a pass from Manny Guzman was picked off by Senior Ernesto Romero and returned for a touchdown to put GVHS on the board first, 6-0.

Romero, who had also had a fumble recovery to add to his spectacular game on defense, walked us through the play.

“Honestly, they preached it to me during practice. They said they were going to try to get the flats. Coach said keep your eyes on him. I did that. The quarterback didn’t see me but I clearly saw the ball.”

The Bulldogs did not stop there as their next drive was capped off by a 5-yard touchdown pass from QB Marquel Bruley as he connected with Richard Salcido.

Golden Valley went up 14-0 after Donovan Valdovinos scored on a 2-point conversion (on his birthday) with 11:52 left to play in the first half.

South gained momentum after an interception by #10 Tyrone Wilson and thought they had answered late in the 2nd quarter on a 55-yard touchdown by Senior Daniel Lomax but the play was negated by an  “ineligible receiver downfield” penalty.

The Rebels went into halftime scoreless despite effectively running the football the entire first half of play.

However, at the 3:42 mark of the 3rd quarter Daniel Lomax and the Rebels finally got points to show for their effective run game when #22 broke free down the South sideline for a 72-yard touchdown.

“Daniel’s a good ballplayer,” South’s Cary Mills said. “It doesn’t matter where he’s at. He’d be starting on any team in Bakersfield.”

South High now trailing by 8 had to continue to bully their way downfield if they wanted to tie the game.

With 4:49 left in the game the Rebels were given the ball at Golden Valley’s 44-yard line. South forced their way into the red zone after a 25 yard run from Lomax. A very questionable “unsportsmanlike conduct” flag was assessed to the South High team after Daniel Lomax signaled first down after another big run for the Rebels.

This penalty pushed South back to the 25-yard line and three plays later Golden Valley scooped up a loose ball after a botched handoff in the Rebels’ backfield.

The Bulldogs ended the game 21-6 on a 35-yard touchdown by Junior RB Iziah Coronado, who had 111 yards rushing on the night.

“I appreciated my linemen today,” Coronado said. “They gave me that touchdown.”

Golden Valley (1-2) will look to add another win to their resume next Friday on the coast at Santa Maria High School.

The Rebels (2-1) are headed up north on Thursday and will attempt to get back on track against Fresno High whom they beat 37-10 last season.