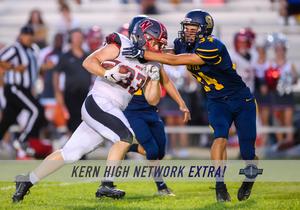 SHAFTER- Call it grit, determination or a need to win, but the North High Stars (2-1) are beginning a short winning streak they want to continue after a 27-13 win at Shafter, Sept. 6.

SHAFTER- Call it grit, determination or a need to win, but the North High Stars (2-1) are beginning a short winning streak they want to continue after a 27-13 win at Shafter, Sept. 6.
A year after a magical 12-1 run to the CIF Central Section Division-V state championship game, the Shafter Generals (1-2) could not find their offensive rhythm at home.
Yet, mistakes were also made by the Stars and North head coach Norm Brown won’t let his players get away with them before league play begins Oct. 4.
“I’m not happy with it. We need four quarters out of our kids again,” said Brown post-game. “We had an offsides on third and short, ran into the kicker and an offsides on fourth and five and that allowed them to stay in the game.” He respected Shafter’s players for staying in the game.
North totaled seven penalties, giving back 54 yards to Shafter.
Despite Brown not content with his players’ performance, running backs Brian Dean, Alex Tejeda and Alex Ruvalcaba led the way for the Stars. Tejeda did not start with Ruvalcaba taking his place because of flag discipline said Brown. Ruvalcaba finished with eight carries on 52 yards.
“It was exciting to see us come out full throttle,” said Dean, who finished with two touchdowns.
“There’s always improvement for better,” he said. Dean said he’s ready for Wasco next week.
He said he finds inspiration to play for his mother, Julie Dean, on the gridiron.
Tejeda stayed consistent and motivated, possibly by not starting - He finished with 80 yards.
“I feel good about it,” said Tejeda. He said about not starting with a slight hesitation, “Yeah, you know, show him [coach Brown] what I can do on or off the field.”
He said he can improve on his high knees and noted NFL running back Adrian Peterson as a source for success. “I’ve loved him since I was little,” he said.
To put the game in perspective, North led 10-6 early in the second quarter. After a couple more touchdowns from Dean and North quarterback Titus Liest, the Stars ran away with the game.
Liest, who finished with 50 yards rushing, threw 4-for-8 on 53 yards, punched in his only touchdown of the night from a monster run from Shafter’s 42-yard line. Late in the second quarter, Liest noticed a pile-up of Generals and Stars mid-field and adjusted himself down the left sideline, leaving the Shafter crowd and players disillusioned, down 27-7 at halftime.
Brown was happy with Liest on the play, but he wants less mistakes from his players, referring to a late penalty that Liest drew.
“We have to go back to the drawing board. It’s a total team effort from our staff and players but next week against Wasco, it’s going to be four quarters of physical play,” said Brown. Wasco was unbeaten on the road during the regular season last year.
Liest echoed his coach’s statement: “We played hard as a team, [but] we’re kind of undisciplined right now,” he said. He added that the Stars need to play hard all four quarters.
Next week, North High takes on Wasco (1-1) at home and Shafter will visit Atascadero (1-2).