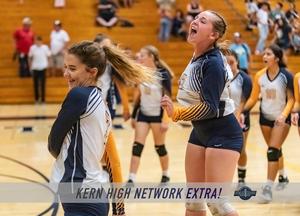 SHAFTER- Volleyball season just started last week, but Shafter coach Sabrina Macias already has a nickname for her 2019 squad. She calls them, “The Comeback Kids.”

The Generals certainly embodied that moniker against Kern Valley on Tuesday night.

SHAFTER- Volleyball season just started last week, but Shafter coach Sabrina Macias already has a nickname for her 2019 squad. She calls them, “The Comeback Kids.”

The Generals certainly embodied that moniker against Kern Valley on Tuesday night.

Junior middle blocker Makena Knapp played a big part in the comeback, tallying a team-high seven kills for the Generals, who improved to 9-1 in their last 10 matches against Kern Valley (1-2).

“They’re definitely ‘The Comeback Kids,’” Macias said. “I don’t like to come from behind, but we’ll take the win.”

A combination of solid all-around play by the Broncs and a multitude of ball handling and hitting miscues by Shafter (1-2) allowed Kern Valley to narrowly win the first set and grab the early momentum.

The Broncs continued to control the match through the beginning and middle stages of Game 2, building a 14-8 lead.

However, with the help of three straight Kern Valley unforced errors, the Generals pulled ahead 15-14. Kern Valley quickly regained the lead, 16-15, but after that Shafter, powered by three Knapp kills, went on a 10-0 run to close out the set.

Game 3 was a near, only more extreme, replica of Game 2. Propelled by back-to-back aces by Lexi Baker and then another two by Arian Hess, the Broncs jumped out to a seemingly unsurmountable 17-6 advantage.

At that point the reeling Generals gathered in a circle for a quick team huddle. When play resumed Shafter immediately went on a 10-2 tear to close the gap to 19-16.

The Generals eventually drew even with the Broncs 22-22, when Alyson Bangert’s kill attempt went long and out of bounds.

The two teams were tied on the scoreboard four more times before Shafter junior setter Kassie Payne scored game-point with an athletic underhanded shot. Moments later Kern Valley was called for a four hits violation, clinching the set for the Generals.

“We all noticed that we weren’t on our game, so we talked it out,” Knapp said of the team huddle. “We said, ‘We have this. We need to get our heads right. The game is not over.’”

After three thrilling back-and-forth games, Game 4 was anticlimactic by comparison. Following three lead changes early in the set, Shafter began dominating the action, outscoring the Broncs 13-5 to put an end to the match.

“it wasn’t pretty,” Macias said. “…I’m a little disappointed in the communication skills that my girls had on the court. I think if we really focus on that, we’ll be able to dominate the rest of our season.”

Maya Wicker finished with a match-high 8 kills for Kern Valley.

“We need to work on mental toughness and when we have a lead just being able to keep playing with tenacity all the way through,” Broncs coach Sabine Mixon said. “…We lost our edge. It’s extremely disappointing, especially when you get that kind of a lead and you watch a (big) run take away your win.”

Payne spread the ball around to a plethora of Shafter attackers, including Bianca Lopez (6 kills), and recorded 18 assists. Francheska Santos and Alicia Pompa notched 5 kills apiece for the Generals.

Despite the win, Knapp thinks Shafter could have played a lot better.

“I think it was a sloppy (match),” Knapp said. “It was not one of our best (matches), but we played hard and we did what we had to do to get a win.”