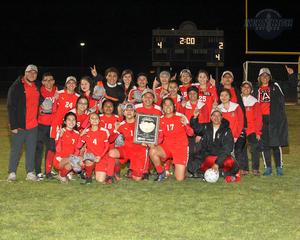 UPDATE: The Arvin Girls have advanced to the semi-finals where they will take on the no. 1 seeded South El Monte.

UPDATE: The Arvin Girls have advanced to the semi-finals where they will take on the no. 1 seeded South El Monte.

Click here to view photos from Round I game

If you had never seen an Arvin Girls Soccer game, and wanted to know how they have become the first team to ever win a league championship for their school this would have been the game to see. In one of the most beautiful displays of soccer knowledge and skill that I’ve ever witnessed, the Lady Bears used ball control to dominate and eventually defeat Fresno Christian High School.

The first half started with Arvin attacking the ball first and maintaining control of play within the first few minutes. They used their early possessions on the ball wisely to set the pace and test the speed and skill of their opponent. Within the first 5 minutes it was evident that the Bears had the skill and footwork to out play Fresno Christian as they took three attempts on goal right off of the whistle. They missed all three attempts and each resulted in a corner kick taken by senior forward Anahi Mora.

One of the corner kicks taken by Mora was a quick touch to junior Cinthia Magana who took an immediate shot at goal from the top right corner. It was a nice corner kick play to watch and displayed the soccer knowledge of their coach, Luis Tello, as it was an intricate and intelligent play which resulted in a perfect yet slightly missed attempt on goal.

Tello’s offense played incredibly smart, and it was clear that this team is a product of a coach with a lot of knowledge of the game. I had never been so impressed with a team’s accountability for each ball and their ability to make every touch matter.

Even more impressive was how the Lady Bear defense displayed just as much skill and ball control to play forward positions if necessary which is what stopped Fresno Christian overall.

At one-point senior Salma Valdovinos, who plays sweeper or last man on defense, was able to take the ball from the defending goal post pass the half line to take a shot on a goal. The shot was blocked and became an assist to Cithlali Sanchez who scored off of the deflection.

The second half started off with aggressive play on both sides as the game was tied 1-1 with the Valley Championship on the line. It became evident that both teams started feeling the pressure as the game became more physical between the two. The Eagles used sophomore Rylee Schwab’s speed to get past Arvin’s defense to score on goal.

The Eagles goal keeper Kayden Marquez had some crucial saves on goal which held the Lady Bears to only 4 points throughout the game. The game came down to double over time where the Arvin Bears secured the win with a final score of 4-2 over the Eagles to grasp the official title as the CIF D6 Girls Soccer Section Champions.

After the game, head coach Luis Tello said “this is the first time in Arvin’s 52 years that girls’ soccer has brought home a valley championship.” After watching what they did out on the field there was no denying that the championship was well deserved and earned by a hardworking team lead by an efficient coach in Tello.

Goalkeeper: Mariela Lopez made smart choices on goal all evening long. Knowing when to come out of the box and when to stay in her post was essential. Each time she returned the ball it was long and precise in helping Arvin continue to move the ball in attempts their score.

Congratulations again to the Lady Bears!