A Night These Boys Will Never Forget 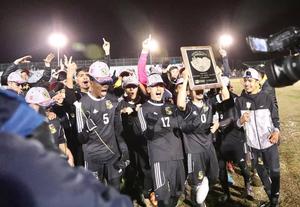 UPDATE: The Foothill High School Boys Soccer team beat George Washington Prep in Round I  with a 2-1 win and will advance to the semifinals and take on No. 3 seeded Troy High (Fullerton) on Thursday at 4 p.m.

UPDATE: The Foothill High School Boys Soccer team beat George Washington Prep in Round I  with a 2-1 win and will advance to the semifinals and take on No. 3 seeded Troy High (Fullerton) on Thursday at 4 p.m. Friday, February 22, 2019 was a perfect night for a soccer match in East Bakersfield.

What a battle these young men put forth.  Beautiful passing, amazing footwork, great runs, great shots, brilliant saves, and strong defense.  This game had it all.

Foothill came out strong at the start, and an anxious Mira Monte finally settled in around the 25th minute of the first half.  Both goalkeepers held the game scoreless at the end of the First Half.

The Second Half started, and both teams were hungry.

The Lions struck first in the 34th minute.  Mira Monte’s #10 Kristabol Vizcarra opted to take a fantastic high in-swinging left-footed shot from a corner kick, and found the back of the net.

18 minutes later, Foothill notched the equalizer.  A pass from Foothill’s backline to Captain #10 Juan Ojeda, featured a great move as he got past the Mira Monte backline.  He pushed the ball past the Mira Monte goalkeeper slide-out, and with a last second goal line pass found Foothill’s #19 Jorge Cruz crashing in for the easy tap in.

The final goal came in the 3rd minute of the Second Golden Goal.  After a flurry of throw-ins, pass deflections, and a lot of grit, Foothill’s #9 Erazmo Hernandez found Foothill’s #17 Jose Medina outside the Mira Monte penalty area for an unbelievable inside-the-toe flick with the right boot that bounced through everyone and past an outstretch Mira Monte goalkeeper to find the side netting.

Congratulations to Foothill’s #00 Sergio Davila.  As a call-up from the Junior Varsity squad he got his FIRST START AND FIRST WIN IN THE CHAMPIONSHIP GAME.  He finished with 7 saves.

Mira Monte goalkeeper and Captain #1 Jose Saavedra had an excellent game.  A strong save off the chest in the First Half, a great full-extension save to push the ball wide in the Second Half, and a brilliant parry over the crossbar in the First Overtime Half where he injured himself were at the forefront of a great performance. Saavedra finished with 11 saves.

A big thank you to the officiating crew, coaching staffs, and the young men for a fantastic match.  As a former player and a fan, it was a pleasure to watch such an exhilarating performance by each-and-every one of you.